A Canadian band combining traditional, power, thrash, and progressive Metal! Respected Metal magazine Brave Words & Bloody Knuckles #92 lists the band as one of the great Canadian Metal acts alongside bands like Rush, Annihilator, Voivod, Anvil, Exciter, and others! The Temple of Metal in Greece called the band “Canada’s best kept secret”! U.S.-based Indie-Music.com says this band is “good enough to have a mainstream appeal similar to that of Priest, Sabbath, Megadeth, or Metallica”! Click here to read more reviews or here to visit us at CD Baby and get your own copies of our Up From The Ashes and Unconscience CDs.

At last, we're proud to announce the release of our long-awaited 3rd album, called UNITY! The album contains 9 tracks of brand new IVORY KNIGHT awesomeness! Check it out at this link or on visit Apple Music for the Mastered for iTunes version!

Check out our new video for 'Into The Black' at https://www.youtube.com/watch?v=5EnL2WXsxNQ

It's nice (and humbling) to be recognized. Ivory Knight has been included in a list of Ottawa bands and artists alongside greats such as Alanis Morissette, Annihilator, and Paul Anka. Thank you again to all our fans and friends, and thanks to the author at ranker.com.
http://www.ranker.com/list/ottawa-bands-and-musical-artists-from-here/reference 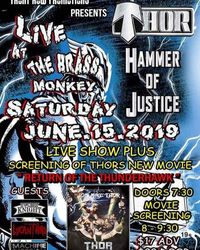 Proceeds go to the Veterans Transition Network of Canada https://vtncanada.org/

Ivory Knight / Malacoda / Uriel / Everybody Wants to be a Ninja Ivory Knight celebrates the release of its 3rd full length CD, titled UNITY. To mark the occasion we're GIVING everyone who comes to the show our new CD FREE! Come grab your copy and join us, our friends Innerpiece, EDJ, and Ruckus. Additionally, all the proceeds from the door at this event are going to be donated to help a couple of friends who are undergoing cancer treatments.

IVORY KNIGHT returns with Special Ops from Montreal. Also appearing are Trigon and Our Forgotten Memories. 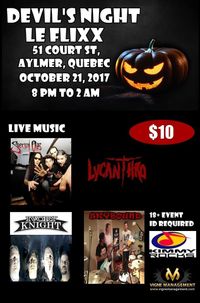 Ivory Knight is honoured to share the stage with legendary Canadian thrash metallers Sacrifice. Also appearing will be Varathron, Infrared, and Endemise. This promises to be a great evening of METAL!

Hard Tickets Available At The Following Locations (When Announced): 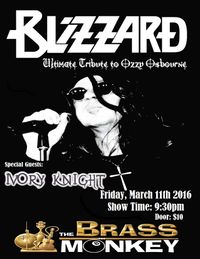 Ivory Knight will be taking to the stage once again, this time with Blizzard: The Ultimate Tribute to Ozzy Osbourne. This is going to be a great evening, folks! Hope to see you at the Show. 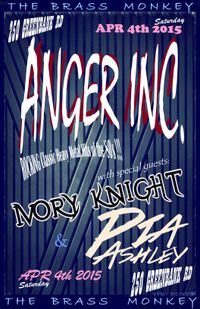 Spring will soon be upon us! Come join ANGER INC. and guests for a fun night of great LIVE MUSIC at The Brass Monkey [250 Greenbank. Rd, Ottawa, Canada] on Saturday, April 4th and experience the incredible voice and music of the renowned Pia Ashley, followed by the powerful rockers, Ivory Knight!! You will not want to miss this show!!

Mark your calendars! Ivory Knight returns to Ottawa and is joined by our good friends and awesome band Innerpiece! 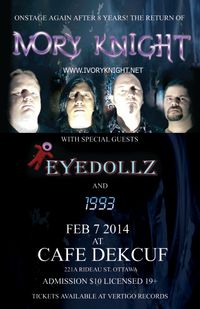 Ivory Knight is poised to make a triumphant return to the live stage. Also featuring special guests Eyedollz and 1993.